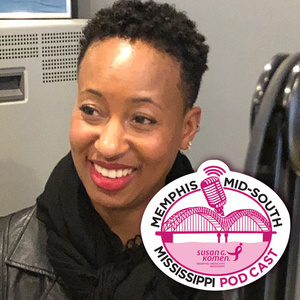 NOTE: Due to the coronavirus situation, the Race For the Cure Metro Jackson event previously scheduled for April 25, 2020 has been postponed.

Danyell Williams had recently given birth to an eager, lively, alert, bright-eyed baby girl, she and her husband, Richard, had named Sadie Seona. While breast feeding 2-month-old Sadie, Danyell noticed a rather large lump in her breast. Her doctor thought it was a blocked milk duct and suggested hand compression and antibiotics. Although concerned due to her mother having been diagnosed twice with breast cancer, Danyell continued to breastfeed and follow the directions from her doctor.

The lump did not go away. Three months passed, and Danyell found a second lump under her arm. This time she became her own advocate and asked her doctor for a mammogram, regardless of her young age of 32. (Most insurance plans are not required by law to pay for screening mammograms for women below the age of 40.) Danyell was immediately sent for an ultrasound and a mammogram, which led to a biopsy that same day. Alone and unprepared, Danyell feared the worst.

Join Catherine Young, Sr. Vice President of the Susan G. Komen Memphis-MidSouth Mississippi affiliate, Molly May, breast cancer survivor and author of My Crowning Achievement, and featured guest, Danyell Williams, as she tells her heart-wrenching story of cancer diagnosis, loss, courage, faith, and the comfort received from the beautiful, encouraging eyes of her baby daughter, Sadie.

This podcast is proudly sponsored by the D.L. Dykes, Jr. Foundation, producers of FAITHANDREASON®. Learn more about their work at www.faithandreason.org.